I was wondering what to make for dinner yesterday when I remembered that there were three chicken drumsticks in the freezer. Turned out there were 2 though. Then I discovered that was some boneless chicken legs too and brought a bit of that into play. We are using Zorabian chicken these days and quite like the quality.

I decided to make my "Indian roast chicken." As against Chinese, Thai or European. The one with a marinade similar to that of the tandoori chicken that I used to make in the microwave before we had an oven. The plan was to keep some aside some for K for her dinner and to then add some rice to mine and put it back in the oven and make a quasi biryani/ pulao, as I have done a few times recently.

That is when I saw one of the matkas (earthen cooking pots), in which they had sent the Dum Pukhta Awadhi gosht biryani from ITC Maratha sometime back, lying on the kitchen surface. K had washed lime in it. I then got the idea of using to the matka to what it was born to do. To cook biryani in!

This is the story of what followed. 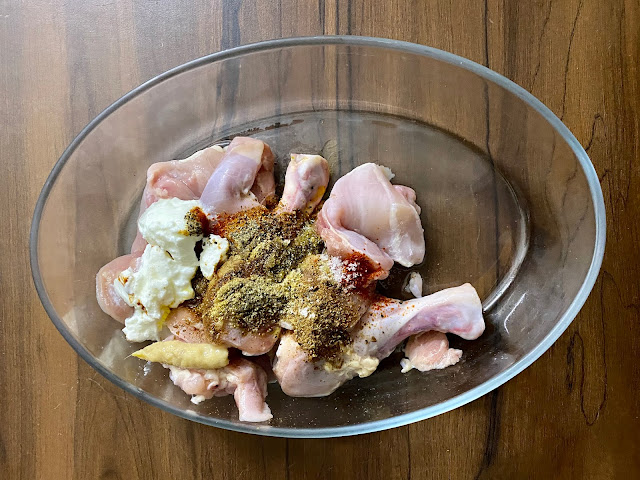 I marinated the chicken pieces in curd, mustard oil, salt, garam masala, biryani masala (which a restaurant had sent and you can use just any garam masala otherwise or buy a packaged biryani masqala), black pepper, red chilli powder, cumin and coriander powder, ginger garlic paste and pink salt. The picture above will tell you the amounts. 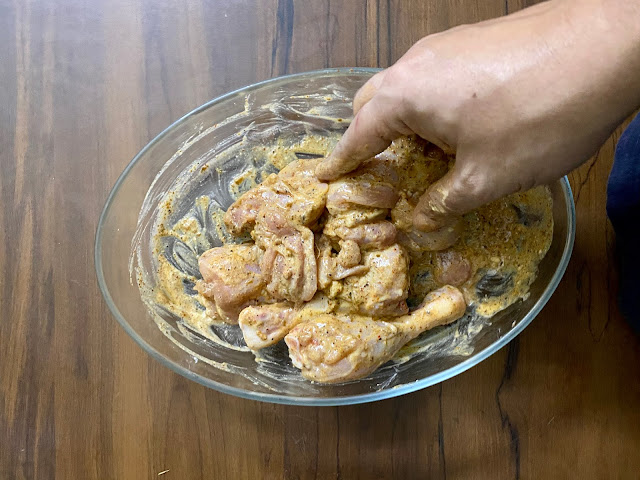 I then placed the marinated chicken on a bed of sliced onions in a glass baking tray and covered it with an aluminium foil. This would ensure that the chicken stayed moist 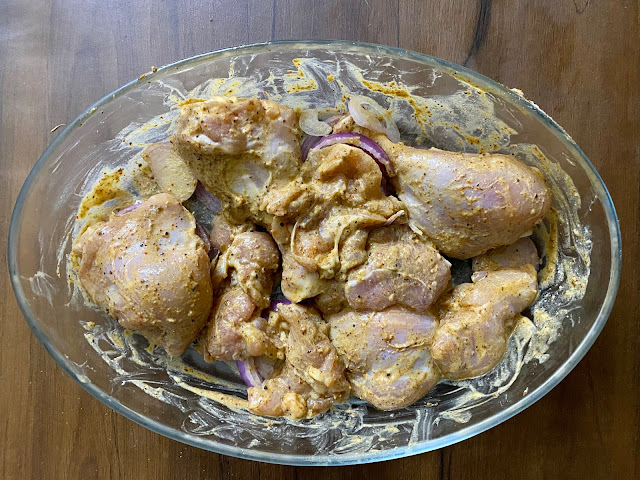 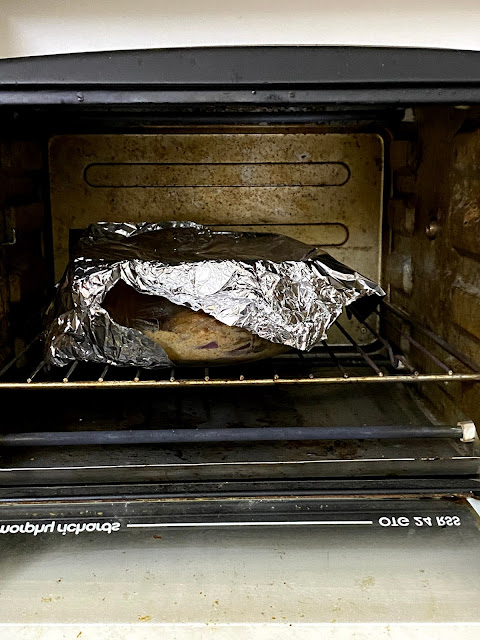 I simultaneously made plain steamed rice. I drain out the water while making rice, the way you would for pasta. The Bengali way. 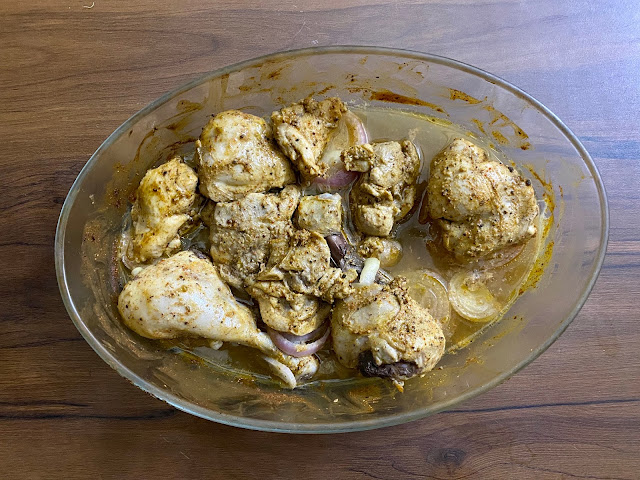 I took out the tray after 35 min and put the chicken legs at the base of the matka and then the rice on top of that. I then drizzled in a bit of the stock that had come out from the chicken in the tray over the rice and sprinkled a bit of salt and the biryani masala on the rice. Trying to layer it all through. I added some of the onions from the tray to the rice. The rice was fully cooked in case you are wondering. 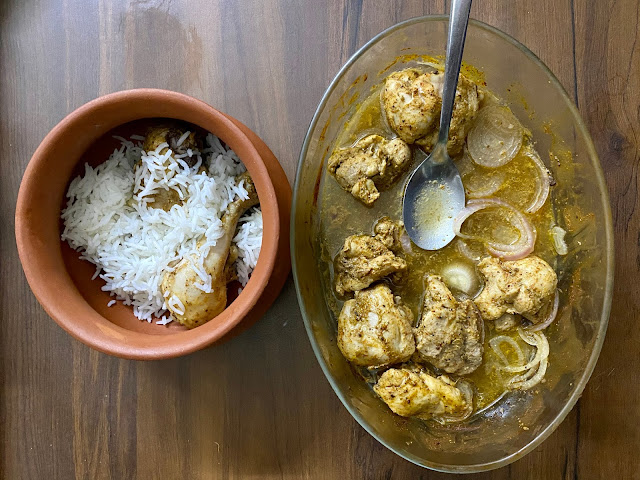 I then added a bit of Jharna ghee from Kolkata. Put a slit green chilli on top. Shreds of saffron. 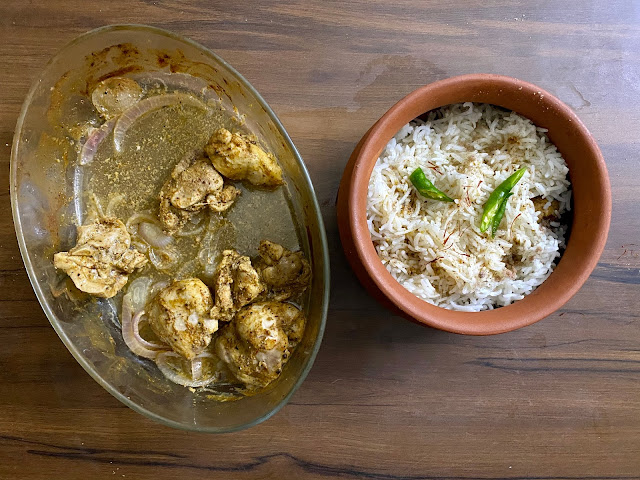 I covered the top of the matka with a steel lid and put the pestle from my mortar and pestle on top to prevent the steam from coming out. We have the lid of the matka somewhere and traditionally one would seal it with flour dough.

I then put the matka on a low flame for ten minutes.


I put the remaining chicken back in the oven after drizzling some mustard oil on it. This time I left it uncovered and put it in the over for 10 min at 200 C. Those were the chicken tikkas for K.

I then removed the lid and oof, the aromas coming from the matka was something else!!!!

The saffron, the Jharna ghee, the mustard oil, the spices had worked their magic in harmony... it was like aromatherapy for the hungry belly.

I felt so happy that I got K to click a pic of mine. 'He is his favourite chef', as she had once written about me!

Thankfully the smile stayed on till the end of the meal. The 'biryani' had turned out rather well.

No, it was not Dum Pukht level. Nor Aminia, Shiraz or Manzilat's; but it was mine and I was very proud of it.

How is that for self reliance or 'atma nirbhar,' as our PM calls it, in the kitchen?

Keka said…
Looks amazing!
And looks doable to a Biryani novice like me.

Sanjay N Lulla said…
It looks lovely and congratulations. I too had some leftover rice yesterday and made them over into soya nugget pulao. Just fried cardamom cloves bay leaf and black pepper pods in oil and added sliced onions minced garlic and nuggets presoaked in boiling water for 20 mins. Sauteed his for the time till the nuggets and onions had turned golden in colour tipped in the rice mixed well and gave it dum just like you did. There the soya nugget pulao was ready. Any non vegetarian would think there were pieces of juicy mutton in it instead if the soya nuggets. #Lockdownexperiments.
27 July 2020 at 14:58

Kalyan Karmakar said…
@Keka thanks I am a novice too. I tried years back and that was a disaster

@Sanjay thanks so much. Soya nugget pulao sounds lovely and reminds me of the nutrela packs of my childhood when they were launched
27 July 2020 at 17:52