Meet salli per eedu. The Parsi shakshuka on steroids.

The first Parsi dish that Kainaz had ever made me - and for years the only one till she landed some stunning ones such as the dhansak, khara papeta, kala masoor, chowra and gambar nu papeta ma gosht during the lockdown - was the salli per eedu.

Simply put, eggs dry poached/ fried/ steamed on salli. Salli are deep fried, thinner than matchsticks, potatoes. Similar to the Bengali jhuri bhaaja, but unlike the latter these are not fried fesh just before eating. They are pre-fried and sold at Gujarati run grocery shops in Mumbai (and across the world I suspect). If you do not have access to this, you can use sliced potatoes to make papeta per eedu.

I made salli per eedu for breakfast today and surprised K. The plan was to make fried eggs and toast and then tell you on Instagram about how this was my breakfast every morning when I went to  our neighbourhood cafe, Candies, to write my book, The Travelling Belly.

Then I spotted the last of the excellent salli, that my mother in law had brought us from Ganagar Stores at Dadar, in the kitchen and decided to make salli per eedu for K and me.

The germ of the idea was planted when I attended an excellent zoom talk last evening by author, chef and TV personality, Gil Hovav, on Israeli food and culture which was organised by the ministry of foreign affairs, Israel. In his talk, Gil spoke about how Instagram has helped make Israeli food trendy today thanks to the colourful nature of modern Israeli food (compared to what is what was in the 80s and 90s). He spoke specifically of the eggs on tomato dish, shakshouka/ shakshuka and of how many across the world made shakshuka during the lockdown and posted pictures of it on Instagram. I had noticed this among Indian food Instagrammers too.

I pointed out in the chat box that the Parsis, whose origins lie in Iran, the country whose food Gil finds the most exciting and evolved among all countries, have a dish called tomater per eedu which is similar to the shakshuka in terms of its being an 'eggs broken on tomatoes and then cooked' dish.

I guess you could call the salli per eedu a tomato per eedu on steroids thanks to the addition of deep fried chips!

Recipe for salli per eedu with fine print added

The thing about posting food pictures on Instagram, is that people immediately want the recipe. Well, here's my recipe for salli per eedu which, like our marriage, is not Parsi panchayat approved.

The missus loved it though! 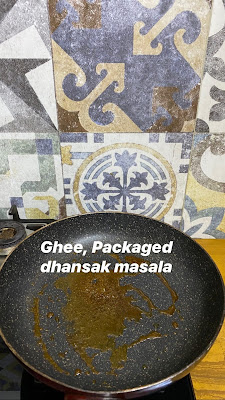 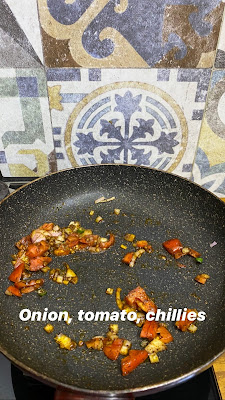 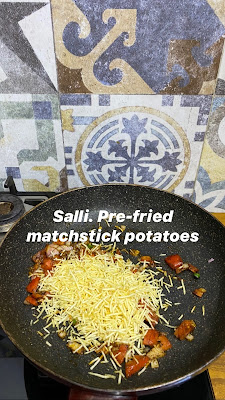 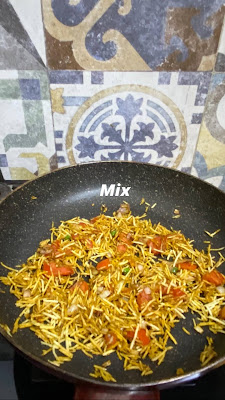 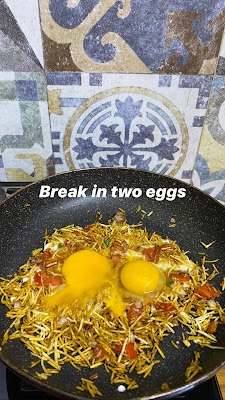 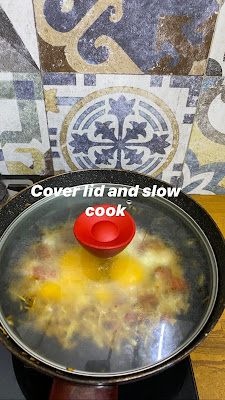 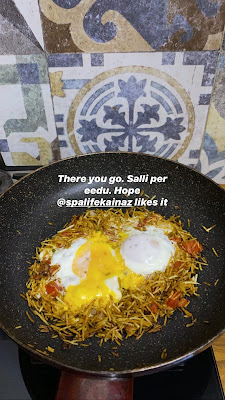 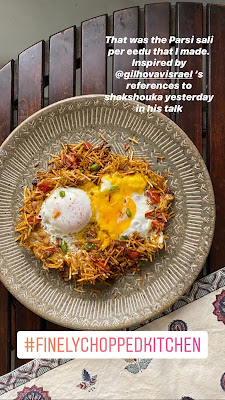 Ingredients (for 2) : 1 teaspoon ghee, 1 tablespoon of packaged dhansak masala (or garam masala), 1.5 tablespoon of finely chopped onion, tomatoes and green chillies, fistful of salli, 2 eggs (a real Parsi would eat three eggs at one go alone, if not more)

As you can see from the picture, the salli per eedu was 'not Instagram perfect'.

The salli base did not form a perfect circle. One egg seemed to have a mind of its own. There's no book on Parsi food, or pictures depicting Parsis and Parsi culture, strewn carelessly in the corner (the table mat that you see in the pictures was to stop my toes from coming in the frame). There were no microgreens strewn on it! Or kothmeer (coriander leaves) for that matter, but as Gil said yesterday, it all comes down to story telling and I could not agree more.


The story of my breakfast today is that of a Bengali who came to Mumbai two decades back, married a local Bawi (Parsi girl) soon after and stayed on in the city.

He had come here from Kolkata to work as a market researcher, eventually became a food writer who works from home. His wife continued to work in advertising, as she did when they first met. She works from home too these days, thanks to the lockdown.

Every morning he thinks of what to make for breakfast and then makes breakfast for the two of them. He tries to ensure they both have a hot breakfast, even though he clicks a pic for Instagram first.

The House of Cats 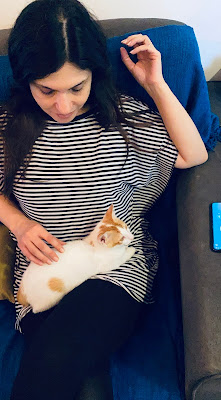 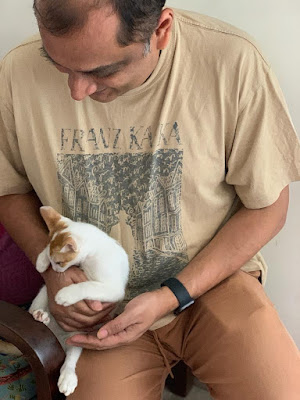 He gave her a plate of toast and half the sali per eedu this morning, while she started her work calls. Then cranked out his espresso and sat down to eat himself. At the start of the lockdown he would often be given company by Baby Loaf, the cat they adopted just before the lockdown. Little Nimki, the 2.5 month old kitten they are fostering, joined him today.

Little Nimki is frisky and jumped onto the table nd he picked him and put him in the bedroom, shut the door and then sat down to eat. Baby Loaf had just woken up and he took the opportunity to feed him so that he could eat (and use the litter box) undisturbed, as advised by Dr Nicole the vet yesterday when they took little Nimki for his vaccines. He had fed little Nimki (and let him poo) earlier while Baby Loaf slept, and played with him. Trying not to play favourites.

Little Nimki often runs into the kitchen as if he wants to be a chef. Baby Loaf on the other hand, wants to be a writer and likes to sit by him when he writes.

Well, there you go.

You have a recipe which works, though its 'authenticity' is dubious, and you have a story too.

Pick what you want  though you are welcome to both. The recipe and the story I mean.

You thought I was talking of the cats?

Hmmm...perhaps my mother who raised two boys, eight years apart in age and who squabbled a lot as kids, would have a point of view on this!