A very Bengali breakfast during the 'hour of the Goddess.' Luchi and alu two ways.

The headline is a tribute to Chitrita Banerji's excellent book: Hour of the Goddess: Memories of women, food and ritual in Bengal

The Bengali breakfast of champions

Breakfast in Mumbai today took me straight to Kolkata.

To my didu's (maternal grandmom) house where she still welcomes me with luchi and shhada alur torkari when I go to visit her during my visits to Kolkata.

To my mother's, where she made alu bhaaja for me when I dropped in for lunch during my last visit to the city. This alu bhaaja...thickly sliced potatoes, stir fried in oil with green chillies, nigella seeds, sliced onions, a bit of turmeric, red chilli powder and salt, was something that I was introduced to in the late 1980s when our rannar mashi (cook) had made it for my mother's tiffin (lunch at work). Some call it chhechki I think. I tasted it and loved it so much that I finished it at night itself before she could take it to college the next day and it became regular at our table at home. I was around 15 years old then.

The two ladies are by themselves in Kolkata and in forced isolation because of the lockdown and one always worries for them. They are handling the situation very bravely.

Breakfast today featured both these potato preparations and luchis, the refined flour based beloved diaphanous fried bread of Bengali (and Assam ans Tripura where they call it luci, Odisha and Bihar too from what I know).

Nope, I did not make this feast. I cannot make luchis as you might know.

The genesis of this breakfast happened last night when out friend, neighbour and my fellow Presidency college alumni, Shaswati, asked us when we would like her to next make luchis for us.

"Tomorrow," I said light-heartedly but Shaswati took it every seriously.

"What potato preparation would you like apart from shaada alu," she asked.

I decided to play along even though I told her not to exert herself. Politely, even if not very sincerely.

"Perhaps the holud kaalo jeere alu bhaaja my mom would make, but not an alur dom. I do not want something too spicy in the morning."

I woke up this morning to a message from Shaswati which said, "good morning comrades! Luchi dough made, potato prep on."

Shaswati is a woman of her words after all.

She added a customary Bengali self effacing disclaimer when she dropped the delicious loot, "see if you like it. The moida (flour) did not behave." 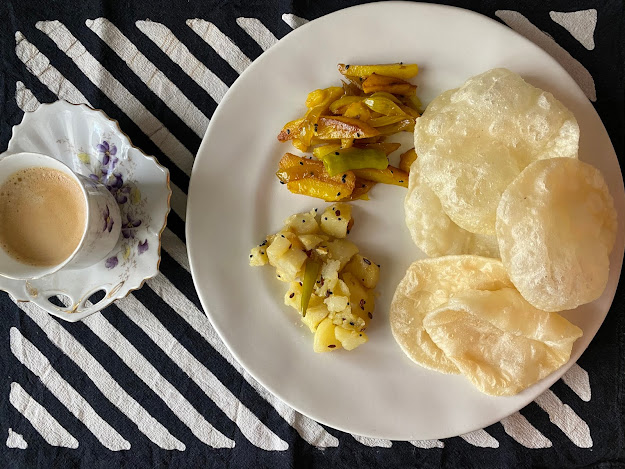 In case you are wondering why I have an espresso and not a Darj with my breakfast, then let me tell you that the answer to that lies in my childhood too. My mom would not let me have tea when I was a kid. She said it was addictive and hence not for kids though my friends in Kolkata had tea. She tried adding coffee to my milk when I was in high school to make me drink up my milk and that sort of worked and made me a coffee drinker since. I never really took to tea after that though I do not mind the occasional dalliance.

The house of cats

Talking of things behaving, I fed our cats, Baby Loaf and litte Nimki at 6 in the morning. I gave then two equally full bowls for them to eat in the drawing room.

Then again when I woke at around 9.30. This time in two different rooms. Baby Loaf likes to enjoy his food and stops in between bites to reflect on life. Little Nimki on the other hand dashes in like Attila the Hun and devours whatever is in site, including Loaf's food. Taking him to another room to eat is my way to ensure that our Cattisatva eats.

They played a bit after breakfast and then got a in to a big skirmish. Next I heard is that Loaf had run out when the door opened.

I was going to set out with a basket to look for him when K, who was worried for my back, asked me to go a bit later. I thought that this was a good plan and had the breakfast Shaswati had so lovingly made with the degree of mindfulness it deserved.

I rolled the foil in which Shaswati had packed the luchi into a ball and gave that to little Nimki. That distracted him so that I could eat in peace.

I finished and sat to chant and suddenly the door bell rang. It was Loaf's godmother Erika, who heard him yowling downstairs and got him up. Rest of the day has gone into my patting him, checking him for claw marks and trying to give him the eye drop his vet suggested I do as he kept blinking his left eye.

I then decided to come to the study and write because I am a bit of a softy when it comes to Loaf and discovering each new possible claw mark on him made my heart sink.

As I began to write I heard Loaf and purr and then go past me and settle in the platform ahead of my writing desk.

And from yesterday when pain and hunger made me crabby and I picked up little Nimki and cradled him for about ten minutes and the world felt beautiful again. 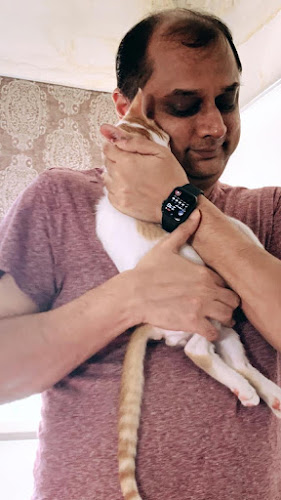 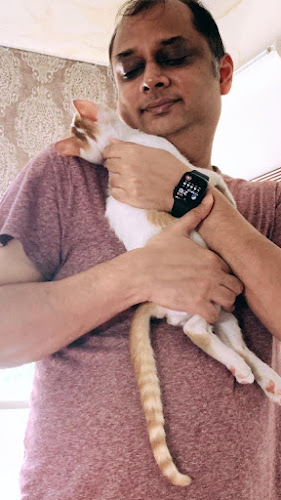 The only Bengali childhood memory in my lunch was mooshoori dal. The rest, jowar bhaakri, surmaifry, lauki (lau) tossed in sing dana (peanut chutney) are very Mumbai discoveries. Nostalgia roots our palate. Experiences over time help evolve it.
A post from when didu made luchi for us two years back in Kolkata.

My recipe for shaadu alur torkari