Bacon and eggs for the win & some magic mushrooms by the side in the kitchen. 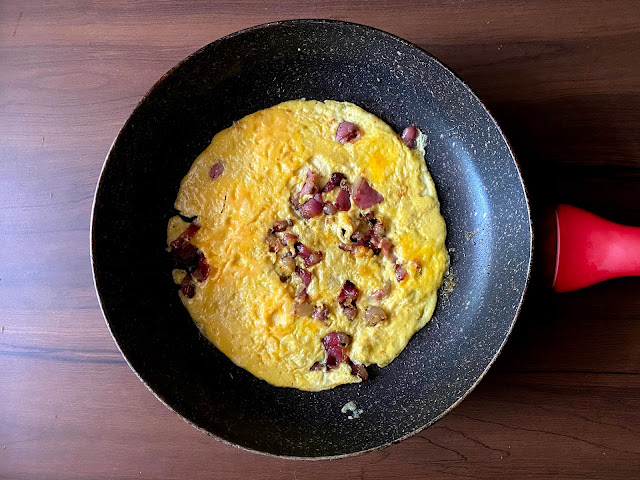 I woke up with a stiff back yesterday today I was a lot better yesterday and had done my physio exercises too.

My plan was to boil some eggs for breakfast, slice them, slap in some of Aditi Limaye Kamath's chilli mustard achari dip and make sandwiches in the griller with the eggs. Delicious and no fuss.

The House of Cats

I then fed them one at a time. Then the two came up to me and I patted them each on the head simultaneously. There's nothing like pet therapy as they say. 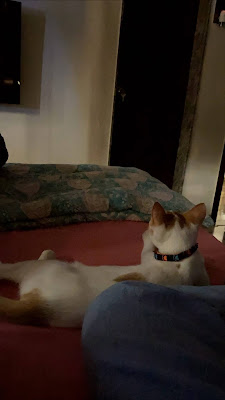 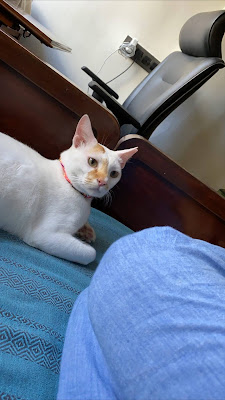 I then remembered that there was the last of the fabulous bacon from Bandra's Incendiary Kitchen that our friend M sent and hatched an alternate plan. 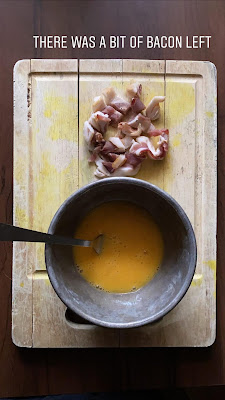 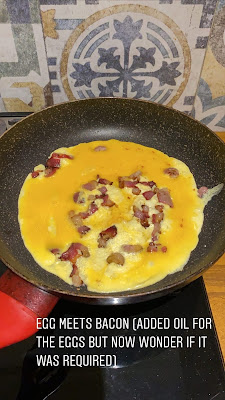 I went to the kitchen. Cracked and whisked two eggs (with a pinch of salt) which I had kept out of the fridge the moment I had woken up. Behaves better than cold eggs. I took out the bacon strips and sliced them.

I switched on the gas hob and put a saucepan on it and once hot, the bacon. Soon the fat begin to melt and a glorious bed of bacon fat flooded the saucepan. I then poured the cracked eggs on the pan. Waited for it to form a bit and then added generous bits of mature English cheddar for as Mithunda had said, 'hum jeete hain shaan se (we live life kingsize). I used two flat ladles and flipped the egg over and turned off the hob and let the eggs cook in their own heat and then portioned it for us in height order. 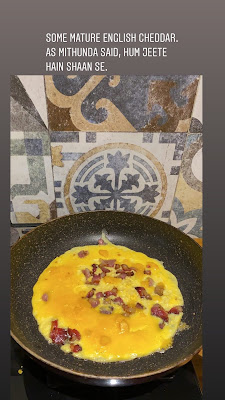 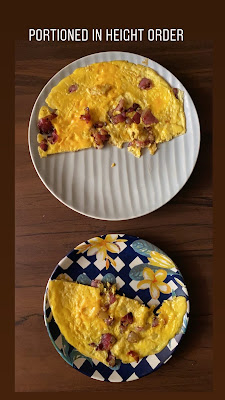 I took out the bread (from Baker's Dozen) that I had put to toast in the oven and cranked out an espresso in the Nespresso machine and could hear the birds serenade us as we sat for breakfast. 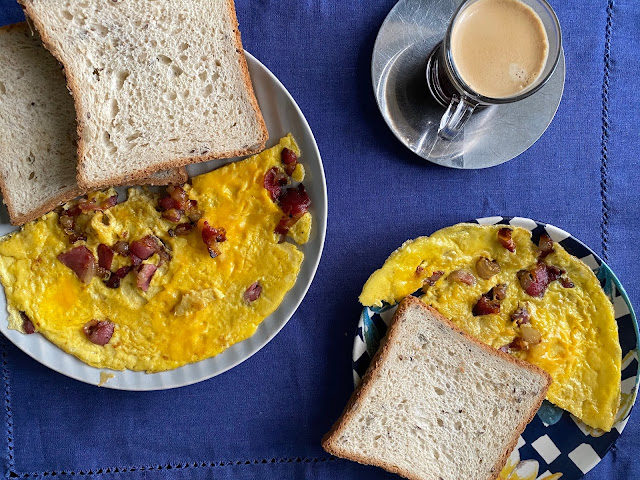 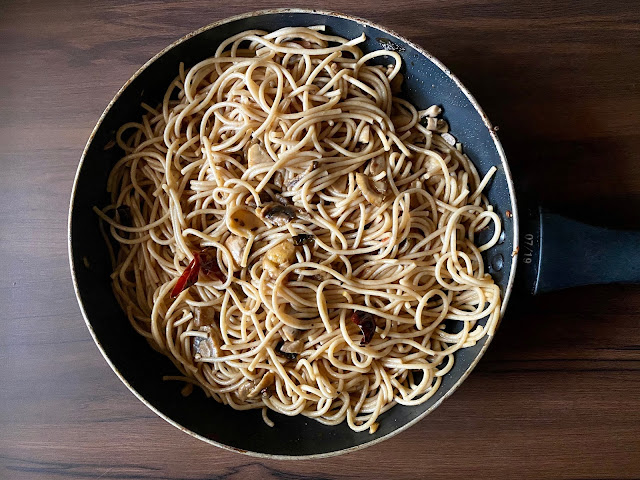 Morning shows the day they say and charged up by breakfast, I decided to make lunch too, even though my back remained the same. The time for defence is over I thought as I began to take charge of my life a few days back and began to work out, accepting that setbacks might happen in between. Ever onward was the motto.

I went to the kitchen. Heated a saucepan on the hob and then put two tablespoons of the aglio olio mix from her Kitchen Stories (based in Dadar), that Aditi Limaye Kamath had sent us along with her fabulous  Achari dips. Then I added sliced button mushrooms to the pan and stirred it.

Little Nimki came into the kitchen and decided to watch me quietly while I cooked swaying to the Phil Collins numbers belted out by Alexa. Kainaz came in earlier just as I said, 'hello Alexa, can you please play me the best of Phil Collins?"

"Who says hello Alexa," she exclaimed. "You and your Downton Abbey world!" 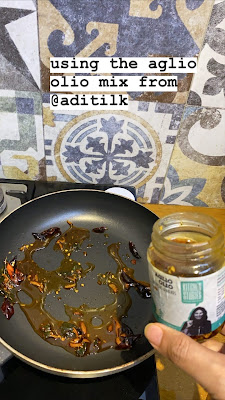 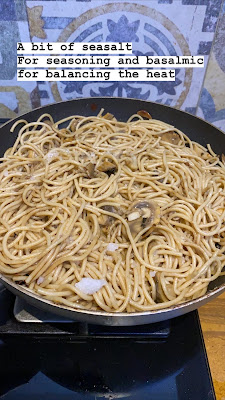 Once the mushrooms were cooked, I added boiled wholewheat spaghetti and a couple of tablespoons of the water it was boiled in. I added some sea salt for seasoning, tossed it all together and added some balsamic vinegar at the end to balance the heat of the aglio olio.

Lunch was lovely and I slipped in a slice of cheese in the portion that we had kept aside to send down for Baby Loaf and little Nimki's best friend, Gia, who is a collegian and added a few drops of truffle oil in ours.

Lunch was good too. 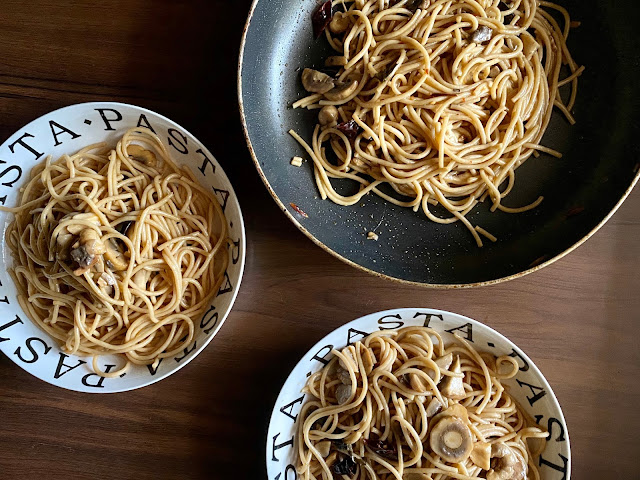 I felt a bit washed out and wistful last night and contemplated taking a couple of days break from writing/ posting and spend the time reading and switching off instead. Will keep you posted. Read a bit last night. That felt good. 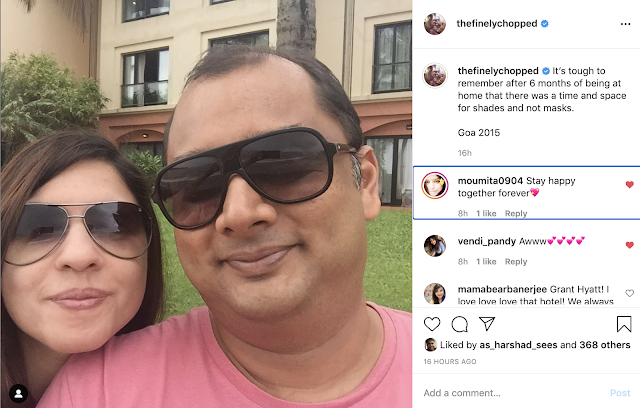 I am not feeling as droll today. One day at a time!

More from the house of cats: 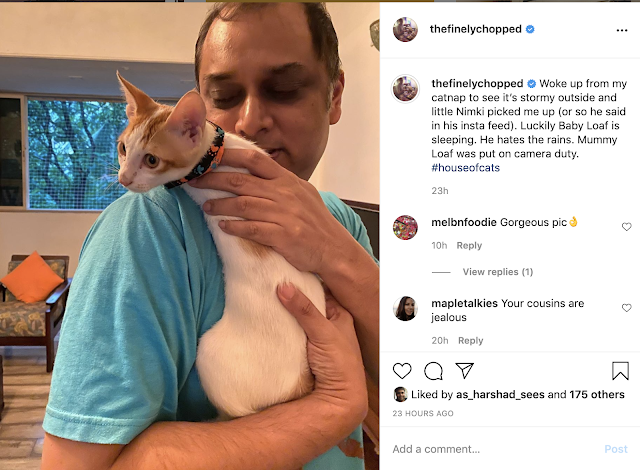 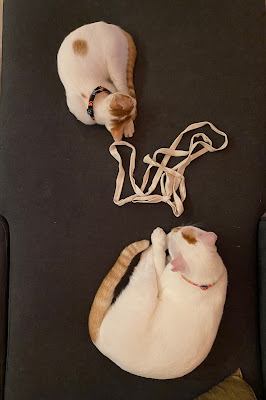 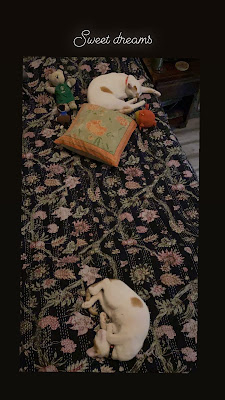 Phil Collins: In the air