The early bird gets the boiled egg sandwich recipe

In today's breakfast travel nostalgia story I am going to take you to the courtyard of our building. The building where we live that is. Not the one I grew up in Kolkata or the subsequent ones that we lived in Mumbai before this.

What? You feel that I am really stretching it with this one? That I have started a series and now feel compelled to force fit things?

Hold your horses. I did go down today. The trip was unplanned. That's a fair bit of travel in these Covid times.

I do not believe in undertaking any activity before breakfast as both my mother and my wife will tell you. I am not a nice man to know before I have had breakfast and any attempts at conversation with me is met with a grunt as my mother in law will tell you. Her morning ritual is to read out everything that she has seen in the morning papers after she has woken up to someone. She lives alone and her only chance to do so is when visits us. That someone is usually me, as Kainaz wakes up later than me. I trundle out to the hall to sip a cup of warm water and look out of the window at the birds and sparrows chirping outside and mummy starts reading out the news to me while I look back blankly. When my mum is here, she complains about the wifi and once I grumble and fix it, she goes off to monitoring her blog stats.

I woke up at 10 am today to K telling me that she had fed Baby Loaf and little Nimki at 7 am and that Baby Loaf had run out when she opened the door of the apartment at 9 am!

I heard her out and went back to sleep. Little Nimki came up and nuzzled by me and slept.

If you are late to our story, then let me fill you in at this point. Baby Loaf is the around 1.5 year old cat whom we adopted this February. Little Nimki is the 3 month old kitten whom we are fostering.

I finally got up at 11 am and went to the hall window with a mug of warm water to sip on when I spotted our neighbour Erika downstairs collecting clothes from the laundry guy at the gate. Then I realised that she had spotted Loaf. He was parked below our car and she went towards him saying, "Loafu, Loafu. Come to me baby." Erika was the first in our building to look after and feed Baby Loaf and the two are  very fond of each other.

I saw this and went down to help. Tempted as I was to do so, I could not entirely give up my cat-parental duties!  I reached the lobby and saw that Loaf and Gluco da, the neighbourhood Alpha male tomcat, were chasing each other and Erika was screaming, "stop it Ginger (her name for Gluco da), you bad, bad boy. Leave our Loaf alone."

Loaf ran back to our car and went below it and parked himself there again. K later said that he probably thinks it to be his safe space as he knows it's our car. I need to explain to him that stray tomcats do not really believe in the concept of diplomatic immunity!

I stood guard by the car while Erika went up and got cat food, a cat feather toy and a basket. The latter was because Loaf had scratched poor Erika in his excitement when Ginger came to fight and it was a better idea to carry him in the basket. She later told me that she had applied turmeric on the wound and added, "anything for Loaf. Glad that he is home safe."

As I had suspected, the kibble strategy did not work! Food is no longer a draw for Baby Loaf. I went up and got the magic potion. Catnip.

I woke up to a bad back and could not bend beyond 4 degrees today unfortunately. Erika took some catnip on her palm and went below the car and drew him out and we put him into the basket and she carried him up. Erika gave me the job of pushing the lift buttons and I did that rather admirably! K, who was on a work call, opened the door and took Loaf in while Erika headed home after saving the day.

I gave Loaf a treat and then fed him and little Nimki in separate rooms. 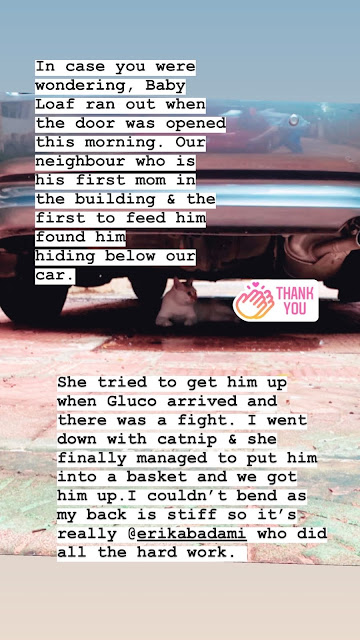 I had put eggs to boil in the morning (had messaged K to turn off the hob through all this) for our breakfast. To make the ever bankable boiled egg sandwiches for breakfast. The power of which both our mothers swore by when we were kids.

Out came glorious, power packed boiled egg sandwiches for K and me to breakfast on, while we traded our respective cat stories from today. Both the boys slept after the morning's excitement!

Banu came to work at 2 pm today and was perhaps surprised to meet a reasonably placid me. I get angsty when my lunch is late. Which is everyday as Banu is no early bird either.

We had had breakfast at 1 pm and that explained my Buddha-like countenance while I discussed the menu for the day with her. Not that I planned to tell her this!

There was a breakfast influence on our lunch that followed. The menu was inspired by a famous Bengali breakfast combination: luchi, kumro chhechki and chholar dal.

I have taught Banu how to make chholar dal (channe ke dal as I refer to it for her) and I gave her my recipe for the kumror chhechki today: heat mustard oil, put in a split green chilli, some Nigella seeds, slices of pumpkin, a smattering of red chilli, turmeric and cumin powders, salt and at the finish, some aamchoor (dried mango powder). Cook till the pumpkin is slightly braised. Sprinkle fresh coriander at the end.

I got her to substitute the luchi (deep fried refined flour bread) with the millet based jowar bhaakri. A Maharashtrian touch, to give it a #LittleJackHornerMeals feel thanks to the goodness of millets.

Thank you for reading on till here.  I know that I had nothing of much significance to say here. Just how my day was so far. Which is what blogs are for.

I will leave the more weighty matters from the world of food to those who have a lot to say on this. You will find many of them on social media.

I am going to nap now and rest my back, but I wanted to fill my dairy (aka blog) first for you.

Update 8 pm: After being quiet all day Loaf darted our when I went to get a food delivery and came across Ballu AKA Grey, another tomcat, and growled at him as he was Sly Stallone. Erika and Gia and came to the rescue and this time I managed to catch him and put our little Rocky in the basket and bring him up.

PS: Latest from the #HouseOfCats 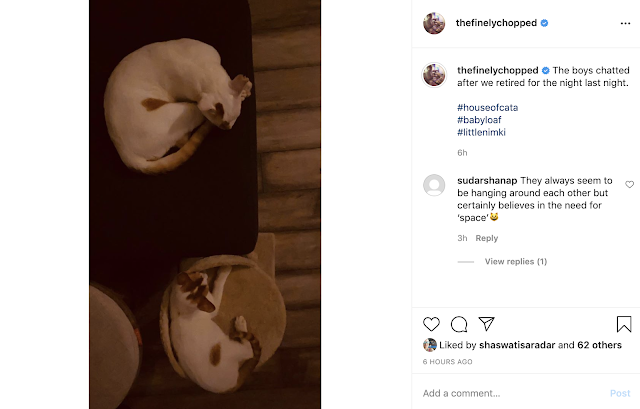 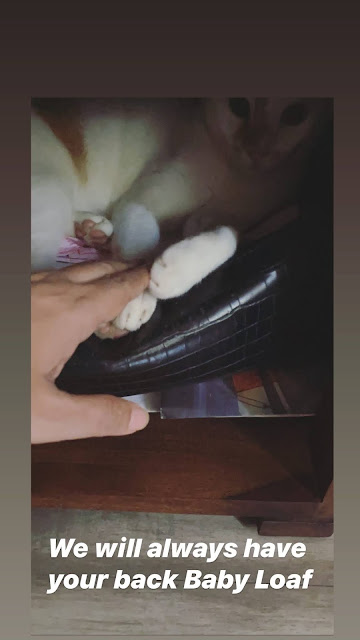 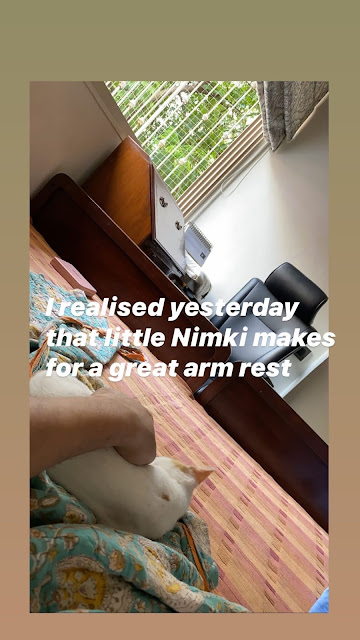 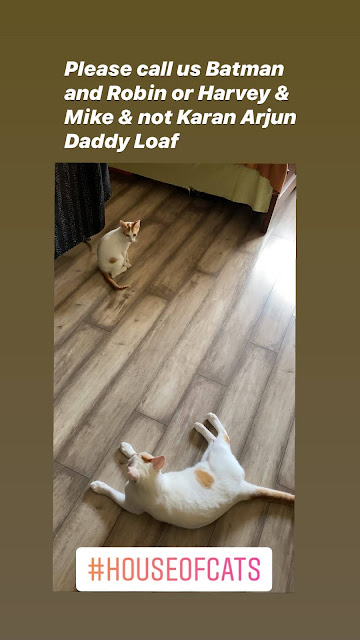